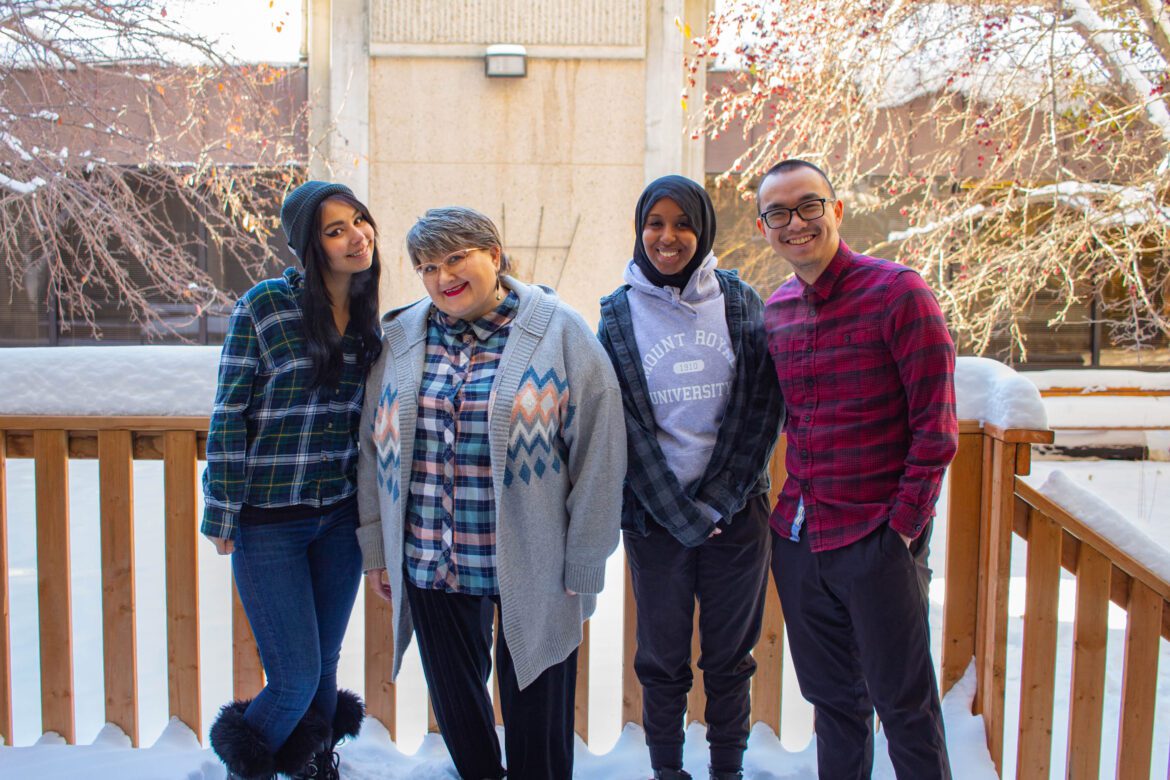 Happy New Year! In this blog, we will look at some of the most significant advocacy wins and some event highlights achieved by SAMRU’s Representation Executive Council (REC) in 2022.

In the early months of 2022, the Mount Royal Faculty Association (MRFA) found itself in the midst of contract negotiations with the Board of Governors. A faculty strike was proposed, and word of a potentially delayed semester spread fast. This raised concerns for students, who had been dealing with an inordinate amount of anxiety and uncertainty around their education since the COVID-19 pandemic was declared in March 2020.
During these negotiations, the REC team opted not to pick sides out of respect for the collective bargaining process, but rather they continued to represent the voice of students to both faculty and administration. To this end, a virtual town hall was held, and a survey was distributed to gather student feedback. Over 800 students responded to share their concerns surrounding a potential strike.
After careful consideration, the Board of Governors and the MRFA reached an agreement, and a strike was ultimately averted. In an email to the campus community, the President of the MRFA thanked the rest of the Faculty Association and the SAMRU REC team. He writes that “SAMRU’s statements about how cutbacks in [post-secondary education] funding drew attention to the need for more flexibility in bargaining” and acknowledges “Spirit River Striped Wolf [REC President, 2020-21, 2021-22] and his team’s bold leadership in articulating students’ own positions about the Government of Alberta’s PSE (Post-Secondary Education) policies.”
Later in the semester, Spirit River met with MRU’s President, Tim Rahilly, to suggest the development of a contingency plan to keep students more informed in the event of another proposed strike, something that he expressed interest in partnering with SAMRU to develop.

Your student representatives made great strides toward the prevention and awareness of sexual violence on campus this year.
In her time as Chair of the Council of Alberta University Students (CAUS), Rachel Timmermans (REC VP External, 2020-21, 2021-22) helped further an initiative to advocate for more protections for survivors of sexual violence.
In a February press conference, the provincial government announced $2.5 million in funding to help Alberta post-secondary institutions modernize their campus sexual violence policies. This is an issue that SAMRU and CAUS have urged the government to take action on since at least 2018, so achieving progress on this front was a big win for all involved.

In 2021, SAMRU compiled a report of Dating, Domestic, and Sexual Violence Prevention recommendations for the institution. In response, MRU moved to form a gender-based violence prevention working group, in which your REC team will participate. A priority for this group has been reworking and improving MRU’s current Sexual Violence Response Policy.

This year, all four REC members sat on the President’s Equity, Diversity, and Inclusion Advisory Committee. As a working group made up of Black, Indigenous, and People of Colour (BIPOC) individuals, allies, and those with expertise in EDI, this committee strives to affirm MRU’s commitment to EDI by disrupting racism and working towards systemic change.
As student representatives, the REC team has contributed fresh ideas and new perspectives to the committee’s ongoing work. For example, Joseph (REC President, 2022-23) has advocated to streamline the process for students undergoing a name change, and Pamela (REC VP Student Affairs, 2022-23) has supported Wellness Services’ propositions to provide free menstruation products in washrooms across campus.

Due in part to the advocacy of your student representatives, MRU agreed to extend the withdrawal deadline for the Fall 2021 and Winter 2022 semesters to assist students adversely affected by the pandemic. This allowed students to withdraw until the last day of classes and still receive a “W” on their transcripts.
MRU also agreed to reintroduce the COVID-pass and COVID-fail designations in the Winter 2022 semester. Students were given the option to select these non-letter grades or maintain their originally assigned grades.
In response to student feedback, SAMRU representatives, alongside the Mount Royal Staff Association (MRSA) and MRFA, penned a joint letter to Alberta’s Minister of Advanced Education to request that the mask mandate remain in place until the end of the winter semester at minimum.
The Minister published a statement outlining that all Alberta post-secondaries were to align their policies with the recommendations of the provincial government, meaning the proposed masking requirement was dropped. In response, Spirit River, SAMRU’s REC President at the time, told the government to stay out of the university’s processes.

Over the summer, the learning management system (LMS) known as Desire2Learn (or D2L) was introduced at MRU as a replacement for the previous system Blackboard Learn. This followed several years of committee meetings, campus surveys, and advocacy work dating back to the Fall 2019 semester by your REC teams.
D2L was selected and voted for by REC as a suitable replacement for a number of reasons, including an increase in storage and stability. You can learn more about the background of D2L at MRU by checking out this blog from September.

As something that’s surely top of mind for many students, we want to bring attention to some highlights related to student finances.
As your elected student representatives, the REC President and VP Student Affairs attend monthly meetings with MRU’s Board of Governors to represent the voice of students. At the Board of Governors meeting in May, your representatives  voted to approve the Government of Alberta’s funding agreement from 2022-2025 and to approve MRU’s 2022-2025 fiscal plan, aimed at a ‘return to normal’ for university operations after two years of uncertainty.
At an Alberta Government conference held April 7th, 2022 at Mount Royal, it was announced that the Government would provide an increase to the Women in Stem Scholarship for the 2022-2023 academic year. As women are often under-represented in STEM fields, this was a big win for Alberta post-secondary students. The $732,500 pledged by the government enabled 293 students to pay for their studies and pursue fulfilling careers in STEM.
“The contributions this scholarship and its recipients will make to the province of Alberta will show returns for years to come. This is one strong foot forward in the movement towards equity for women,” said Rachel Timmermans (REC VP External, 2020-2022).

In May, your representatives voted to increase the MRU Emergency Bursary allotted to each student from $750 to $1500 per academic year. For any student who has encountered an urgent, unforeseen occurrence requiring immediate financial resources, please consider applying for this bursary through the Office of the Registrar. You can also access emergency funds through SAMRU’s Peer Support Centre (Z210).

Thanks for tuning in as we recap some advocacy highlights from the past year, and as always, keep your eyes open for updates, statements, and more on our ongoing work on social media by following the SAMRU REC Twitter @SAMRUREC. If you have any questions, you can always reach out and email us at representation@samru.ca.