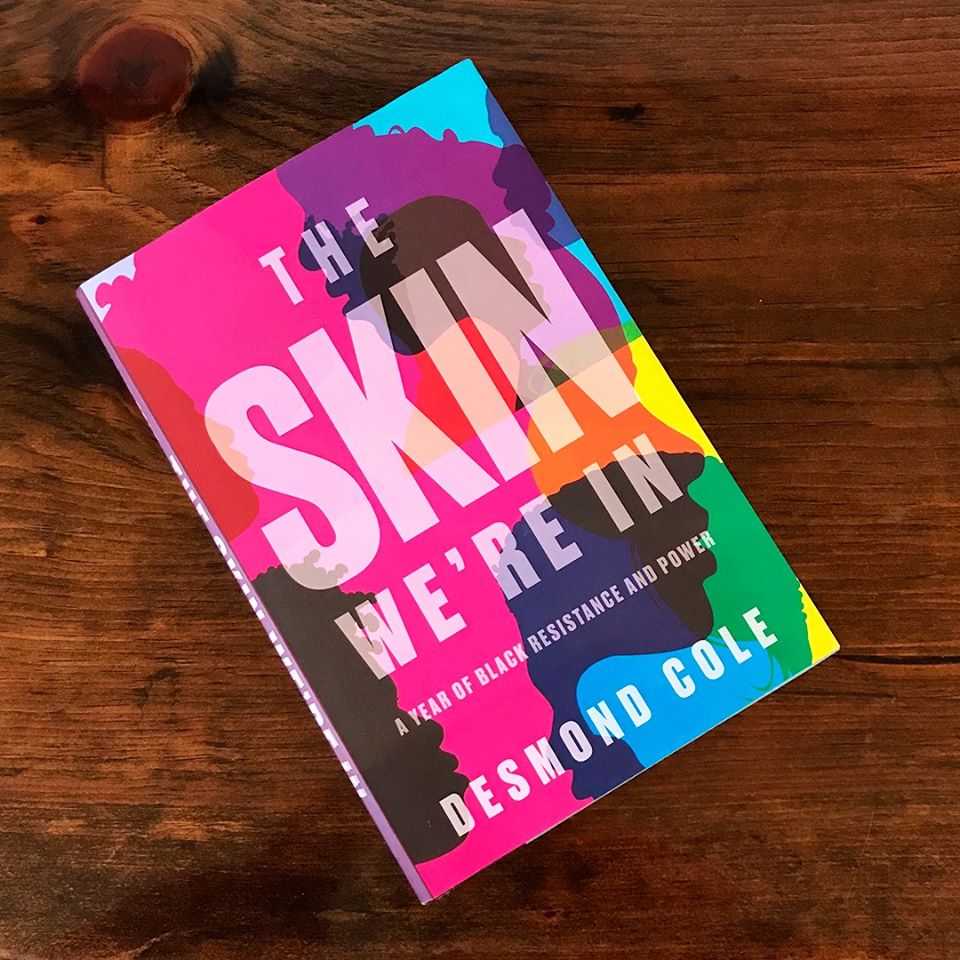 The third book to be featured in the Black History Month Book Series is Desmond Cole’s The Skin We’re In: A year of Black resistance and power!

Desmond Cole is a fellow Albertan born in Red Deer to parents who immigrated to Canada from Sierra Leone. He is an activist, broadcaster, and journalist living in Toronto and is most notably known for his work in exposing the Toronto Police Department for its carding and racial profiling practices. He has worked extensively with Black Lives Matter Toronto to successfully remove the Toronto Police’s presence from Toronto District School Board-run schools. Desmond has also worked to address housing, social support, integration, civic engagement and justice for youth.

Cole delivers a gripping narrative of the year 2017, through this year he details the events that unfolded within his community, while also narrating some of his own personal experiences. The novel begins in 2016 with the destruction of an art gallery by the Toronto Police Service (TPS) and the harassment and arrest of a young black artist John Samuels. By the end of the novel in December 2017, Cole describes the fight to keep a Somalian man, Abdoul Abdi in the country where he rightfully belongs.

Throughout the novel, Cole illustrates situations that both personally impact his own life, but also the lives of people he cares for and the larger BIPOC and BLM community that he is a prominent part of. Throughout the novel, Cole stands in solidarity with the Indigenous people of Canada who are also experiencing many of the same experiences as the BLM community. Admirably, Cole explains that he was born on Treaty 7 territory and that his family moved to the territory of the Wendat peoples in Ontario. Most notably, Cole expresses his distaste for the ‘Canada 150’ celebrations because of its ties to settler colonialism. Cole also holds space for land defenders and activists advocating for Murder and Missing Indigenous Women (MMIW). Perhaps the most powerful part of this portion of the novel is Cole’s call to call this situation a genocide at hands of the Canadian government. He also muses about the impact of imperialism on his ancestors from Sierra Leone and provides an intersectional understanding of how he shares similar plights with Indigenous peoples here in Canada.

Toronto pride was exposed heavily by Cole for its long-lasting harm done to the BIPOC community. BLM is a focus in this portion of Cole’s book because of its call to remove all police floats from the Pride parade. That year, BLM effectively and impactfully interrupts the Toronto Pride parade to bring attention to Toronto Pride’s long-standing anti-black rhetoric that has ignored queer minorities since its inception. Also identified by Cole was the large-scale corporate involvement in events like Pride that capitalize on the image of the community. This allows corporations with large-scale involvement to make decisions for minorities without effectively consulting them.

Cole portrays a new type of Canadian history, one that is more contemporary than the average high school social studies textbook. The use of historical context and contemporary examples effectively illustrates the life of a young BIPOC person living in Canada today. Just as all of the amazing books presented in this series, Cole has a way to use his experiences to tell stories that evoke empathy and compassion. Join us to continue conversations around Black Lives Matter with BLM YYC, Ms. Adora Nwofor, and DICE (Diversity, Inclusivity Conversations and Experiences)!

Join our DICE (Diversity, Inclusivity Conversations and Experiences) student group as they lead us in this session to discuss some of the implications of the BLM movement. The discussion will be moderated by Adora Nwofor, President of BLM YYC, an organization that continues to agitate, educate, and organize Calgarians around the message that Black lives matter. As an entrepreneur, organizer and keynote speaker, Ms. Nwofor, has spent her life in Calgary championing for the rights and dignity of the BIPOC community and other marginalized folx. This activity is organized in honour of Black History Month and in partnership with SAMRU.

This program is put on in partnership with BLM YYC, Ms. Adora Nwofor, and DICE (Diversity, Inclusivity Conversations and Experiences) student group.

How to do May long weekend on a budget